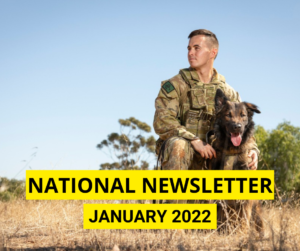 We hope that everyone had a wonderful Christmas and 2022 brings health and happiness to all.

With the federal election due before the end of May, we are expecting to have a reasonably busy first half of the year. At the end of last year, the National Executive finalised what our major policy objectives will be over in the lead up to the election, and into the next parliamentary term. We thank all those members, veterans, and family members who provided us feedback during our consultation process.

You can read more about our policy objectives here.

We hope all within the Defence and veteran community are looking after themselves during the pandemic. Although lockdowns appear to be a thing of the past, the current Omicron wave brings its own hardships and challenges. Please remember there are services available to support your mental health and wellbeing.

From 24 January, the Government is providing up to 10 free rapid antigen tests over a three-month period (maximum of 5 per month) to eligible Commonwealth concession card holders. This includes DVA Gold, White, and Orange Veteran Cards.

You will need to attend a participating community pharmacy and give consent for the pharmacy to record your concession card details. The pharmacy will give you a minimum of two test kits. You can ask to receive up to the monthly limit (5).

Test kits are subject to availability. You should phone your pharmacy ahead of you visit to make sure kits are available.

If you have COVID-19 symptoms DO NOT attend a pharmacy to collect test kits. Go directly to a testing centre.

The media release announced the government was introducing legislation that reversed the effect of Douglas v Commissioner of Taxation on Defence Force Retirement and Death Benefits (DFRDB) and Military Super (MSBS) class A and B invalidity benefits which commenced after 20 September 2007.

Readers of this newsletter and of DFWA’s magazine, Camaraderie, will know that the Douglas case has resulted in significant tax savings for affected class A and B invalidity benefit recipients who are classified as unable or unlikely to ever work again. You can read more about the tax benefits available, here.

However, we must also acknowledge that some recipients are unable to gain the same tax advantages and may also be negatively affected.

DFWA supports legislative change to remedy those negatively affected but will absolutely oppose any legislative change that removes the tax benefit flowing from the Douglas decision or that claws back consequential benefits such as the Family Tax Benefits.

You can read more here.

On 1st September 2021, following the completion of evacuation operations at Kabul Airport, The Senate Foreign Affairs and Trade References Committee was tasked to conduct an inquiry into Australia’s twenty-year engagement in Afghanistan.

The terms of reference for the inquiry included: the success of the mission; its cost; the adequacy of Australia’s preparation for withdrawal; and how Australia should respond to recent developments in Afghanistan.

DFWA did not make a submission to the inquiry, as the terms of reference were focused on operational and political matters, which is outside of areas we typically comment on.

Many readers will have a DVA White or Gold Veteran Card, which entitles you to have medical treatment for your accepted service-related, or all conditions paid for by the Commonwealth.

In many cases, the fees paid by DVA to healthcare providers are significantly below market rates – private billing fees, as well as other injury compensation schemes such as Comcare.

For instance, a 20-minute GP consultation would receive $86 from Comcare, Queensland’s Workcover, or NSW iCare. DVA pays only $52.65 (in a metro area).

DFWA is advocating for a better funding model. Fees paid by DVA should not deter providers from taking on veteran clients.

Read more about this issue here.

DFWA advocates to government on a range of issues that affect all cohorts of veterans and their families. We do this on a very tight budget—our main sources of income are through annual membership fees and individual donations.

The Royal Commission into Defence and Veteran Suicide held its first public hearing at the Brisbane Convention Centre on Friday 26 November. This was a largely ceremonial event, with ten days of “Block 1 hearings” commencing on Monday 29 November through 10 December 2021.

You can access all the witness lists, transcripts, video recordings, and exhibits for the Block 1 hearings here.

Once again, thank you all for your continued support.