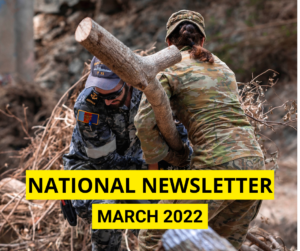 This year’s federal budget is best described as “business as usual” for the veteran space. That said, there are some welcome spending measures:

The Veterans’ Home Care program delivers services to support veterans and families to remain living in their own homes. From 01 July 2022, the hourly fees for domestic assistance and personal care will see increases of between 16% at 25%.

You can read more about it here.

This program assists eligible VEA, DRCA and MRCA veteran families, including eligible widows, with assistance for household services, counselling for the family, and a range of other practical supports.

This package was originally announced as part of last year’s budget for commencement in July 2022.

This year’s budget has increased the budget from $5.1 million to $36.8 million over four years.

It is important to highlight that this measure is subject to the passage of legislation.

You can read more about it here.

Eligible Veterans’ Affairs payment recipients and Veteran Gold Card holders will receive a $250 cost of living payment in April 2022. The payment is intended to offset higher cost of living pressures.

DFRDB pensions for those under 55 years, as well as all Military Super and ADF Cover pensions, are indexed twice a year to the Australian Bureau of Statistics Consumer Price Index (CPI).

Indexation by CPI was intended to ensure that pensions received under these schemes maintained the buying power of that pension. While CPI was appropriate when it was one of the major tools for wages determination, it has changed and now the CPI no longer reflects costs of living.

The Government and all parties have recognised this and changed indexation for other payments to factor in both CPI and the Living Cost Index to better preserve buying power.

All Defence Force superannuation pensions should have the fair indexation applied so that retired veterans aren’t going backwards.

You can read more here.

The Australian Institute of Family Studies (AIFS), in collaboration with the Department of Defence and Department of Veterans’ Affairs, is conducting a new study on Australian military and veteran families and are seeking study participants.

Telling your stories will help inform government and service providers on how military and veteran families are faring and what could be done to improve lives within and beyond military service.

The study is open to families of current ADF members and members who have left the ADF in the last five years, who have children under 18 or who are expecting or planning children. As a thank you, families in the study will be offered a $50 shopping voucher from Coles or Woolworths.

DFWA advocates to government on a range of issues that affect all cohorts of veterans and their families. We do this on a very tight budget—our main sources of income are through annual membership fees and individual donations.

Readers may be aware of recent public interest in issues affecting people under guardianship and financial management arrangements administered through the various state Public Trustees. Some of these issues were highlighted in the ABC Four Corners episode “State Control” which aired 14 March 2022. You can watch that episode here.

DFWA has long held concerns about the financial arrangements for veterans with capacity issues arising from their service-related injuries or illnesses. Whether the various state Public Trustees are used would depend on the circumstances.

Many veterans have complicated health and social factors that impact their ability to manage their personal and financial affairs. Additionally, the veteran legislation administered by DVA provides for the appointment of trustees in those circumstances. Their procedures recommend the appointment of Public Trustees in the absence of suitable family.

It is reasonable to assume that veterans may be over-represented amongst those under guardianship or financial management by the various Public Trustees.

Our experience tells us that loss of perceived control and helplessness is a contributing factor to suicide, suicidal ideation, and mental health deterioration generally. Guardianship and financial management arrangements by public trustees and guardians, however well intentioned, may exacerbate those factors.

DFWA has written to the Royal Commission to draw their attention to this issue and the possible impact of such arrangements on veterans. We want to insure that those veterans have a voice.

Our strength as a national and state veterans’ advocacy organisation comes from our membership base. If you are not a member of DFWA please consider joining!

DFWA is saddened by the sudden death of Senator Kimberley Kitching.

Our sincere condolences to her family. Senator Kitching will be sorely missed by the veteran community.

The latest edition of Camaraderie is available on the DFWA website.

Update on Taxation of DFRDB and Military Super Invalidity Benefits

The Government had previously announced that it was introducing legislation to reverse the effect of the Douglas v Commissioner of Taxation on Defence Force Retirement and Death Benefits (DFRDB) and Military Super (MSBS) Class A and B invalidity benefits which commenced after 20 September 2007.

At this stage, no legislation has been introduced into parliament, and it is unlikely that any will be introduced before the election.

However, it is likely that whichever party forms government following the election, will need to introduce legislation to remedy those veterans who are negatively affected.

We will continue to support such positive changes but will absolutely oppose any legislative change that removes the tax benefit flowing from the Douglas decision or that claws back consequential benefits such as the Family Tax Benefit.

DFWA is also aware that the Australian Taxation Office is reviewing how Lump-Sum Payments in Arrears are taxed, for those veterans who have been retrospectively medically discharged since September 2007. Depending on the outcome of that review, there may be fewer veterans negatively affected by Douglas.

Once again, thank you all for your continued support.