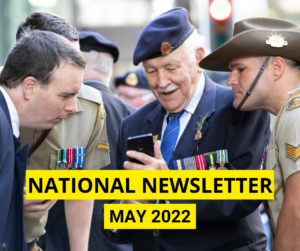 I’m sure we are all looking forward to the end of the election campaign. Whether it is the gnawing jingles or the constant media analysis of every single move and comment the politicians make, it will be a relief when it is over.

Regardless of who forms the next government, DFWA will continue to work with all sides to progress our policy objectives.

The achievement of our objectives may not have the same excitement as turning a sod on a new facility, or the presentation of an oversized cheque, but they do have an impact.

Our objectives, including improving veteran access to healthcare, fixing issues with Defence Force superannuation schemes, and challenging inappropriate or ill-conceived legislation; are fundamental to the overall welfare and wellbeing of all defence members, veterans, and their families.

This week, 16-22 May 2022, is National Volunteer Week. It is Australia’s largest celebration of volunteering and ensures the vital work of volunteers within our community is recognised across the country.

In keeping with this year’s National Volunteer Week theme ‘Better Together’, as Acting National President of the Defence Force Welfare Association, I thank all our volunteers for their commitment to the Association, as together we serve and support all current and former members of the ADF and their families.

Thank you also, to the many veterans who volunteer in other ways, whether in other ex-service organisations or community groups.

There are a few important news items that you should be aware of. I draw your attention to the article on Douglas and Invalidity Benefit Taxation. This week sees some significant changes for around 15,000 DFRDB and Military Super invalidity pensions. Some of those affected may be unaware of the change or what options are available to them if they are negatively affected. If you are or know anyone who is affected, please check out our article and the CSC website.

As always, if there are issues affecting the defence and veteran communities that need attention, then let us know.

Thank you for your continued support.

Review of Medallic Recognition for RCB

The Australian Defence Force has had a continuous footprint on the Royal Malaysian Air Force Base Butterworth since 1970, when the Rifle Company Butterworth (RCB) was deployed at a time of unrest in Malaysia.

A group of former RCB members have been lobbying government to recognise RCB service between 1970-89 as “warlike”.

In early April, the Minister for Defence Personnel, Andrew Gee MP, announced that the independent Defence Honours and Awards Appeals Tribunal will re-examine the issue of medallic recognition for Australians who served with Rifle Company Butterworth in Malaysia between 1970 and 1989.

You can read the ministers media release here.

The inquiry is public, and you can make submissions to the Tribunal before 01 July 2022. Further information is available on the Tribunal’s website.

The Royal Commission into Defence and Veteran Suicide held its block 4 hearings in Canberra between 04 and 14 April 2022.

The focus of the hearings was around Defence culture and claims processing by the Department of Veterans’ Affairs.

The Royal Commission has been extended by 12 months, with the final report due on 17 June 2024. The extension of the Commission recognises the complex factors that contribute to deaths by suicide.

The interim report will still be submitted to Government by 11 August 2022.

More information is available on the Royal Commission website.

Regular readers would be aware of ongoing delays with the Commonwealth Superannuation Corporation (CSC) implementing the tax changes resulting from the Douglas decision.

The Douglas decision impacted the tax treatment of DFRDB and Military Super invalidity benefit pensions that commenced on or after 20 September 2007. The pensions became a series of superannuation lump sum payments and veterans who are certified as unlikely to ever be gainfully employed in their trade or profession may receive significant tax concessions.

In April, CSC announced that it would be fully applying the law and implement the tax changes following the Douglas decision. You can read their release about it here.

Some veterans may see a reduction in their pensions, due to changes in the tax withholding requirements. DFWA recommends that those affected review the CSC webpage, which details the available options.

DFWA strongly encourages any veteran receiving either DFRDB or Military Super (MSBS) invalidity benefits to learn more about the changes and the Disability Superannuation Benefit. General advice only – you should see a financial planner or other professional to consider your own circumstances.

Unlike previous federal election campaigns, issues and policies affecting veterans and defence personnel and their families are scarce.

That is not necessarily a surprise – climate change, integrity, and the rising cost of living seem to be the dominant features of the campaign. The ongoing Royal Commission into Defence and Veteran Suicide may also have dampened the public’s urgency.

Mr Boys is an army veteran who, while serving, was involved in three separate vehicle accidents. As a result of those accidents, he developed a condition called cervical spondylosis.

Mr Boys put in a claim to DVA to have that condition recognised so he can be compensated and receive medical treatment for it. His claim was rejected, and he has gone through the several levels of appeal.

In Federal Court, the Repatriation Commission (DVA) argued that according to the statement of principles (SOP), the clinical onset of his cervical spondylosis was when he had the x-ray that was used to diagnose the condition – some thirty years after his medical records show and expert medical opinion concluded, was the onset of the spondylosis.

Not only does this defy common sense but goes against existing law and DVA policy. The DVA Chief Health Officer has even said:

DVA delegates should not be using the date of imaging evidence as the [clinical onset]. They should be getting medical advice from our Contracted Medical Advisers or the veteran’s own Treating Doctor as to when the clinical onset occurred.

There are obviously more aspects to this case that are not easily summarised; however, the confusion between onset and diagnosis is key.

Aside from the impact on an individual veteran, there are some serious concerns here. The Commission/DVA has run litigation that is counter to its own policy and case law. The confusion between clinical onset and diagnosis appears to have been a known issue within DVA for some time yet continues to affect veterans.

At the time of writing, legal team has filed an appeal in the Federal Court. DFWA will watch with keen interest as this case progresses, particularly the approach taken by the Repatriation Commission.

Some good advice from the Chief Health Officer:

If you’ve lodged a DVA claim for a degenerative condition such as cervical spondylosis and the decision doesn’t make sense in regards to the ‘clinical onset’ date, I recommend you raise the issue with your advocate and request an internal review or, if necessary, a review by the Veterans’ Review Board or the Administrative Appeals Tribunal.