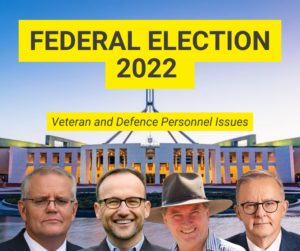 On 21 April 2022, nominations for candidacy closed. In this election, there are:

Unlike previous federal election campaigns, particularly the 2016 election, issues and policies affecting veterans and defence personnel and their families are limited. That is not necessarily a surprise – climate change, government corruption, and the rising cost of living seem to be the dominant features of the campaign. The ongoing Royal Commission into Defence and Veteran Suicide may also be limiting the desire/need for the major parties to have any serious policies in that space –  the issue has essentially been ‘parked’ for the time being.

DFWA has contacted all of the registered political parties, highlighting the key issues we are focused on:

Ensuring families are not disadvantaged by Defence service

DFWA asked each political party registered to contest the 2020 Federal Election seven questions, based on the issues listed above.

DFWA received responses from eight parties. The scoreboard below summarises those parties and the Coalition (which did not respond). Scores are based on their responses and published policies.

Read more about the scorecard and every party’s veteran / defence personnel related policies, their responses etc. Details on every registered political party are included

Election 2022: How The Parties Compare

13 May 2022
DFWA asked each Party registered for the 2022 Federal Election whether it supported the policy objectives of the DFWA. The DFWA reviewed each Party’s veteran and defence personnel related policies. Check out the scorecard and details of each Party.
READ MORE

01 May 2022
The Greens have a suite of policies that specifically affect veterans and have existing veteran policy positions which the Greens have advised remain current.
READ MORE

22 Apr 2022
The Coalition released its veteran centric policies for the 2022 Federal Election. Veteran centric budget measures from the Federal Budget 2022-23 have been included.
READ MORE