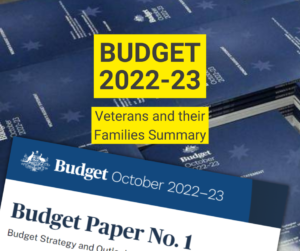 What the government said about Veterans and this budget

We are investing $233.9 million over 4 years to recruit 500 additional staff to speed up compensation claims processing. With a further $87 million over 2 years to improve veterans’ access to support and services. To improve the welfare of veterans $46.7 million will be provided for 10 Veterans’ and Families Hubs across Australia

Australians owe a debt of gratitude to our veterans

When a person enlists in the Australian Defence Force, they commit to serve their country and the people of Australia. All defence personnel deserve to feel mentally and physically safe and well, during and after their service.

The Royal Commission into Defence and Veteran Suicide is an important opportunity for the Government to ensure veterans have better access to the support they deserve. The Government is investing $233.9 million over 4 years to recruit 500 additional staff to speed up compensation claims processing. In addition, a further $87 million over 2 years will be invested to improve veterans’ access to support and services. The Government is also developing a pathway to implement the Royal Commission’s recommendation to simplify the legal framework for veterans’ compensation and rehabilitation.

To help veterans with rising cost‑of‑living pressures, the Government will provide a $1,000 increase in the annual rate of the Totally and Permanently Incapacitated Payment from 1 January 2023.

Further practical support to improve the welfare of veterans will be provided through $46.7 million for 10 Veterans’ and Families’ Hubs across Australia. The Hubs connect veterans and their families to a range of services for mental and physical health, employment, housing advice and social connection.

14.4 million over four years to enable Services Australia to set up an Act of Grace payment process, to ensure veterans and their former partners do not receive child support debts because of the Douglas v Commissioner of Taxation Case.

$9.5 million over two years to create a pathway for legislation improvement to address longstanding complexities in the veteran support system.

This initiative is underway.

A pathway for reducing complexity in the current veterans’ compensation and rehabilitation framework will be developed for consideration by the Government in late 2022, taking into account the views of the veteran community and previous proposals, such as the Productivity Commission’s report A Better Way to Support Veterans. It will also consider potential improvements to the Military Rehabilitation and Compensation Act 2004.

$233.9 million over four years for 500 additional DVA staff to help eliminate the compensation claims backlog and support the wellbeing of veterans and families.

This initiative will commence immediately.

500 additional frontline staff will help to eliminate the backlog of claims and reduce wait times for veterans and families, improving health outcomes and wellbeing in the veteran community. These staff will be employed as Australian Public Service positions.

$87.0 million over two years to improve the administration of the claims processing system and veterans’ services.

This measure intends to make it simpler and easier for veterans and families to lodge claims and access support and services through enhancements to ICT systems such as MyService and back-office systems.

The initiative supports the response to Recommendations 2 and 3 of the Royal Commission, helping veterans and families navigate the claims process through easier, transparent, and streamlined form lodgement.

It will also position DVA for ongoing modernisation of the claims administration system, enabling efficiency and agility to rapidly implement legislative change called for by the Royal Commission.

Increasing the Totally and Permanently Incapacitated Payment for Veterans

$97.9 million over forward estimates (three years) to provide an increase to the fortnightly Special Rate payments under the Veterans’ Entitlement Act and the Military Rehabilitation and Compensation Act.

This initiative was an election commitment.

Eligible veterans will receive an increase to their fortnightly payment of $38.46 per fortnight. From 1 January 2023 the Special Rate will be $1,617.16 (including the Energy Supplement) per fortnight.

Around 27,000 veterans receiving either the TPI Payment, Temporarily Totally Incapacitated (TTI) Payment and Blind rate of Disability Compensation Payment under the VEA or the Special Rate Disability Pension (SRDP) under the MRCA.

The hubs deliver wellbeing focused support and offer a one stop shop for local veteran services, including advocacy, employment and housing advice, social connection, and physical and mental health services. The services at hubs are available to all current and former serving Australian Defence Force (ADF) members, including reservists, and their families. The Veterans’ and Families’ Hubs have a key role in helping ADF members and families as they transition from military to civilian life.

$24 million over forward estimates (three years) to provide greater support to ADF personnel as they transition to civilian employment.

The Veteran Employment Program will raise awareness and champion veteran employment by ensuring veterans’ skills and experience are understood and valued by the wider community.

The package includes RPL support provided through the Department of Defence and grant funding to assist the tertiary sector to develop or enhance veteran RPL frameworks and support within institutions, and to help businesses to adopt targeted veteran and partner recruitment and retention mechanisms.

$3.6 million over two years to deliver on the Australian Government’s commitment to provide funding to the Council of Australian Veterans to support the planning, design and construction of the Scott Palmer Services Centre in Darwin, Northern Territory. The Centre will include a six-unit temporary accommodation facility with an office space for veterans who are experiencing homelessness or are at risk of homelessness.

$1.5 million over the forward estimates to establish an ongoing grant program to support community recognition of First World War veterans interred in private graves who are not eligible for the Australian Government’s program of official commemoration.