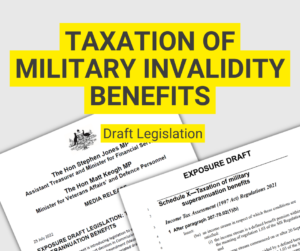 The Government is introducing legislation to “ensure no veteran pays higher income tax because of the Federal Court decision in Commissioner of Taxation v Douglas. A draft bill, Treasury Laws Amendment (Taxation of Military Superannuation Benefits) Bill 2022 and associated draft explanatory material, have been released for public consultation.

According to the Government’s media release:

The draft legislation confirms the lump sum tax treatment for affected members of the DFRDB and MSB. The Government’s approach means that affected veterans in the DFRDB and MSB schemes will not only retain the income tax benefits of the Douglas decision but also retain the resulting benefits of changes in their taxable income, such as Family Tax Benefit entitlements and the childcare subsidy.

The Government has also decided to extend these changes to Spouse and Children’s pensions paid to a spouse or child following the death of a member of a DFRDB or MSB scheme affected by the Douglas decision to ensure these beneficiaries are no worse off.

You can read the exposure draft legislation and the explanatory memoranda on the Treasury Website here.

Submissions on the draft legislation are invited until 05 August 2022. Details on how to submit are included on the Treasury Website.

DFWA will be reviewing the draft legislation and making a submission.

DFWA has maintained an active interest and advocacy in the Douglas Case. The DFWA Queensland Branch Honorary Legal Advisory Firm, Cleary Hoare Solicitors, was heavily involved, representing the veterans in the test cases.

You can follow the history of this matter here.