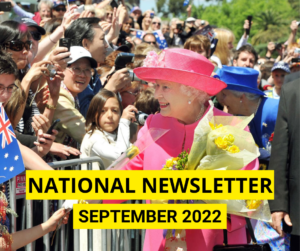 The passing of HM Queen Elizabeth II should give us all cause to pause and be thankful for the example of stability, compassion and the love she has given us throughout her reign. A truely remarkable lady and monarch through this turbulent period in the world’s history.

The Royal Commission into Defence and Veteran Suicide presented its interim report to the Governor-General on 11 August 2022. The Government tabled the report in Parliament the same day.

Australia’s veteran compensation and rehabilitation legislative system is so complicated that it adversely affects the mental health of some veterans – both serving and ex-serving ADF members – and can be a contributing factor to suicidality. The report recommends that the Australian Government should, without delay, implement legislative reforms to simplify and harmonise the veteran entitlement system.

Claims processing at the Department of Veterans’ Affairs

The claims system is complex and difficult to navigate and that veterans wait for long periods of time to receive a decision about their claims – sometimes more than 300 days. As of 31 May 2022, DVA had 41,799 claims in its backlog – claims waiting to be allocated to a decision-maker. The backlog should not be allowed to continue.

Protections to engage with the Royal Commission

The report expresses concern about inadequate legal protections for persons who may want to engage with the Commission. These include, but are not limited to, serving members who intend to stay in the ADF and have concerns about the impact their disclosure of sensitive information may have on their career. In addition, some serving and ex-serving ADF members may consider themselves constrained from telling us their lived experiences due, for example, to those experiences occurring on operationally sensitive activities.

The report recommends that the Australian Government design legislative amendments that provide protections for these cohorts to allow the Commission to receive information potentially vital to the fulfillment of its terms of reference.

Regular readers will be aware that the Government is introducing legislation to “ensure no veteran pays higher income tax because of the Federal Court decision in Commissioner of Taxation v Douglas. A draft bill, Treasury Laws Amendment (Measures for a later sitting) Bill 2022: Taxation of Military Superannuation Benefits, and associated draft explanatory material, have been released for public consultation.

The proposed legislation does the following:

DFWA is of the view that all veteran superannuation invalidity benefits should receive the same beneficial tax treatment provided by Douglas, regardless of which scheme or when payments commenced.

The National President of DFWA met with Minister Keogh and his staff on 3 August 2022 to object to this aspect of the proposed legislation. The President has subsequently met with Defence Head of People Capability, Major General Stothart, and members of the Shadow Ministry on this matter.

DFWA’s submission to Treasury regarding the proposed legislation similarly reflects this position.

DFWA has also released a media statement on this matter here.

You can follow the full history of this matter here.

Lack of accurate information from CSC

The Commonwealth Superannuation Corporation (CSC), which administers the veteran superannuation schemes, publishes factsheets on important topics such as taxation. The current CSC factsheet on MSBS Invalidity Benefit Taxation makes no mention of the impact of Douglas. This is despite the factsheet being updated since the Douglas decision.

This is a key source of information for scheme members and informs their decisions. It is particularly important to those members considering switching from MSBS to ADF Super / Cover, such as those members re-joining the Defence Force, perhaps on a continuous full-time service (CFTS) contract.

Around one in five ADF members who discharge each year do so on medical grounds. Invalidity benefits provided by superannuation schemes are an important consideration, and the information that is provided to members who are considering changing schemes needs to be correct. The tax consequences are serious and for life.

Several years ago, the Defence Bank Foundation via the DCD program implemented a process which has far reaching benefits for the greater Defence Community. That was when DFWA (NSW) first became involved in the hope that sponsorship of Dogs would become a regular and routine program. Now it’s fair to say that COVID-19 has impacted the delivery of dogs to veterans in several ways, but let’s focus on the ‘pawsitives’!

This Defence Bank Foundation DCD initiative involves acquiring and training dogs to become (more than just) Assistance animals for Defence members who are suffering from PTSD. The process revolves around several key elements:

This then gives a Win-Win-Win outcome – The dogs having been re-purposed and given a new lease on life, the inmates having graduated with formal qualifications thereby assisting them to re-assimilate into community life, while the Veteran has a new approach to life with a valuable companion to assist them in dealing with their PTSD challenges, for negligible cost, apart from those costs associated in having a family pet.

The cost of the training scheme is now around $12,000 per dog over a 6-10 month period, which also includes Veterinary support and assistance with the provision of food.

More recently, DFWA (NSW and ACT) agreed to partner with the RAAF Association (NSW Branch) to co-sponsor two additional dogs in the hope that such an initiative will become an enduring project to bring together Veterans with the challenges of PTSD and animals with a renewed sense of purpose for a satisfying life ahead! When Ex-Service Organisations collaborate, the entire community wins!

An update to the Boys Case.

DFWA has previously reported on an appeal under the Veterans Entitlement Act by veteran, Mr Boys. During the appeal the Repatriation Commission argued that the onset of Boys’ cervical spondylosis was the date he had medical imaging done. This mixes up diagnosis with clinical onset and is contrary to both legal precedent and DVA policy. You can read more here.

DFWA wrote to the Liz Cosson, Secretary DVA, expressing our concerns about the broader implications of this case, particularly about the Repatriation Commission running litigation that is counter to its own policy and precedential case law, and whether the Commission acted as a model litigant. Members of the DFWA National Executive also raised this directly with the Secretary during a recent forum.

DVA continues to consider the legal and policy ramifications of the Boys decision. DVA will continue to work with the RMA in relation to the affected SOPs.

Since the Boys decision, DVA Policy and Legal Services have been collaborating more closely on the approach to matters pending appeal.

DFWA will continue to take an interest in the conduct of litigation by the Repatriation Commission.

On a positive note, the Repatriation Commission decided to accept liability for Mr Boys’ cervical spondylosis.

The Royal Commission into Defence and Veteran Suicide block 7 hearings will be held in Darwin between Tuesday 18 October and Thursday 27 October 2022. Hearings will be conducted at the Hilton Darwin.

More information is available on the Royal Commission website.